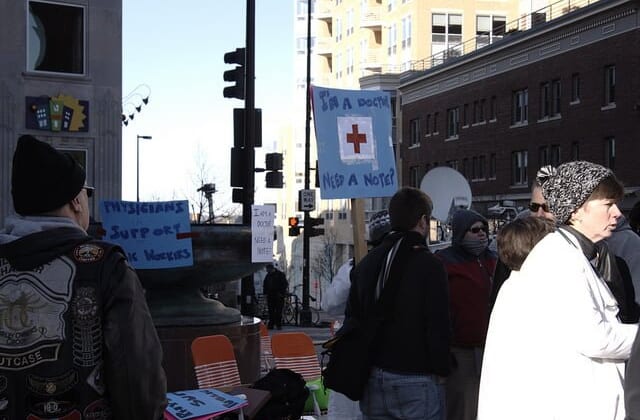 Doctors in Wisconsin are being investigated and criticized for writing false sick notes to excuse protesters from work, the Wisconsin State Journal reported.UW Health said that they are currently looking into the allegations against the doctors to determine the appropriate course of action to take.

“These charges are very serious,” UW Health said in a released statement. “These UW Health physicians were acting on their own and without the knowledge or approval of UW Health.”

Meanwhile, the Wisconsin Medical Society has said that it does not condone the doctor’s actions over the past weekend.

Representatives from the state Department of Regulation and Licensing, which includes the medical board, have not yet commented.

Multiple videos have been posted online over the past week, showing doctors handing out sick notes to masses of teachers marching out in the cold, protesting Governor Walker’s proposal to dissolve unions.

While some doctors claim that the protesters are stressed, and the sick notes are thus justified, others argue that it is necessary to sit down with each and every patient and conduct a physical examination to determine whether or not a sick note is appropriate.  The videos show that no such examination is taking place in most cases.

State regulations forbid doctors from “knowingly making any false statement, written or oral, in practicing under any license, with fraudulent intent.”