Is There a Marathon in Your Future? 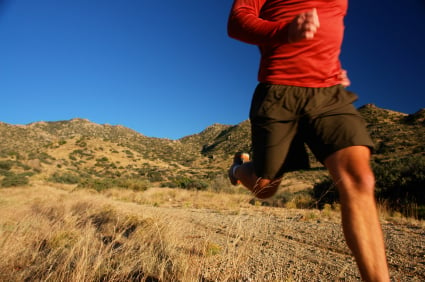 If you’re a regular runner, you probably have fond memories of your early training days. You may have begun with an easy walk-run schedule. In a few weeks you finally built up to your first all-running mile. Then came your first 5K, then your first 5-mile or even 10K, and perhaps your first road race. Those were heady times, filled with thrills of meeting ever higher goals.

Now, though, you’ve settled in to a nice routine of 15 miles or so each week. You’ve lost weight, your checkups are better, and you have more energy throughout the day. But sometimes when you’re lacing your shoes, the thought crosses your mind: been there, done that.

If you’re looking for a new challenge, you may consider running a marathon or half-marathon. But before hitting the high-mileage road, you need to know about the benefits as well as potential dangers. Most of all, you should learn how to avoid injuries while going that extra mile (or 26).

For many, the biggest benefits of long-distance running are psychological. “There’s a high that comes from setting a tough goal and meeting it,” says Alfred W. Hanmer, MD, an orthopedic surgeon and endurance runner who specializes in sports medicine. Hanmer’s group, Newton-Wellesley Orthopedic Associates, holds an annual post-Boston Marathon walk-in clinic for people injured during the race.

Marathoner Eve Pell has definitely felt that runner’s high. “To my mind, completing a marathon is one of the most powerful experiences you can have,” she says. Pell began running when she was in her mid-40s. She ran her first marathon in 1982 but mostly did 5K and 10K runs after that. In 1997, she entered the Boston marathon because she believed that she could be the fastest woman in her age category. And she was. “Call it vanity. But it was a great experience,” says Pell, who, in 2007, won a gold medal in the World Master Championships in Riccione, Italy at age 70 and was ranked the second-rated road-running woman in the United States. (A few years later, Pell married another competitive runner, a widower in his 80s.)

Of course, the benefits of marathon training aren’t confined to the mind and spirit. Regular, moderately intense exercise (like running) will strengthen the heart and burn calories. You just might lose those few extra pounds that seem to have withstood your shorter running regimen.

In addition, training for a marathon helps you be more disciplined in your lifestyle choices. San Diego-based personal trainer and marathoner Cheryl Sheremeta says that when people train for their first marathon, their diet tends to improve, they make sure they get enough sleep, and they may even listen more carefully to their doctor. “People consider marathon training very daunting,” she says. “They tend to do everything they can to increase the chances they’ll succeed.”

Sheremeta is also a coach for Team In Training (http://www.teamintraining.org), a non-profit organization that is a major fund-raising mechanism for the Leukemia and Lymphoma Society. The organization helps people train for a marathon or half-marathon. In return, participants get friends and family to “sponsor” them, pledging to contribute to the Society after the event. (The Arthritis Foundation has a similar organization called Joints in Motion at http://www.arthritis.org/events/jointsinmotion).

Of course, a marathon is not in everyone’s future. You shouldn’t feel like you’ve failed if your doctor recommends against running one, or if you just don’t feel up to it. There are plenty of other sports to enjoy.

And if you are able to train, don’t push yourself past your limit. Along with the benefits of marathons that Sheremeta cites come a number of risks. The biggest downside to marathon training is that it may result in an injury. Most running injuries are “overuse injuries” — such as tendonitis and bursitis — that result from the constant repetition of the same movement. The most common site of injury is the knee, although virtually any area below the waist (and a few above it) can be affected. Nearly 70 percent of runners are sidelined because of an injury, but most can get back on the road relatively quickly. In some cases, though, the injury can last for years.

Sports medicine specialist and Case Western Reserve University clinical professor Kara H. Browning, MD, believes that most casual runners can get into marathon shape within six months with little chance of a long-term or disabling injury — as long as they take proper precautions. “The key is to build up the mileage gradually,” she says. Browning stresses that potential marathoners should begin with a base of 15 to 20 miles a week for six months to a year. Then they should increase their mileage by no more than 10 percent each week. (Many Web sites, books and running supply stores have training schedules you can use as a guide.)

Browning also suggests alternating heavier training days with lighter or rest days and cross-training with non-impact activities like biking or swimming. Since everyone’s feet are different, she emphasizes the importance of wearing a good pair of running shoes. Seek recommendations from a store that specializes in outfitting runners.

Probably the best way to protect yourself against injury, says Dr. Hanmer, is to listen to your body. While many runners have pre-set training schedules they want to meet, pain may be an indicator that you should slow down a bit, or even take a week off. Some pain is normal. But if it persists all day, or if it affects the way you run — your stride or posture, for example — it must be taken seriously. You may take an anti-inflammatory like Advil (ibuprofen) after a run, but Dr. Hanmer believes it’s better not to take it before the run. It may mask an important warning sign.

All sports have their risks, and marathon running is no exception. But with a bit of discipline and careful training, the risks can be managed. And the result can be an accomplishment you’ll remember with well-deserved pride for the rest of your life.